This search form uses an instant search feature. As you type, search results will appear automatically below the search field. When you've entered you desired search terms use tab to navigate through the available results and hit enter to open the selected page or document.
EDIT LEFT

No. of months School Attended - 8

Each Teacher will bring a bucket of water and a scuttle of coal for the day's session.

Make your pencils carefully. You may whittle nibs to the individual taste of the pupils.

Men teachers may take over one evening each week for courting purposes, or two evenings a week if they go to church regularly.

After ten hours in school, the teacher may spend the remaining time reading the Bible or other good books.

Women teachers who marry or engage in unseemly conduct will be dismissed.

Every teacher should lay aside from each day a goodly sum of his earnings for his benefit during declining years so that he will not become a burden on society.

Any teacher who smokes, uses liquor in any form, frequents pool or public halls, or gets shaved in a barber shop will give good reason to suspect his worth, intention, integrity and honesty.

The teacher who performs his labor faithfully and without fault for five years will be given an increase of twenty-five cents per week in his pay, providing the Board of Education approves.

Not to keep company with men.

Not to loiter in downtown ice cream stores.

Not to leave town at anytime without the permission from the Chairman of the Board of Trustees.

Not to smoke cigarettes. This contract becomes null and void immediately if the teacher is found smoking.

Not to drink beer, wine, or whiskey. This contract becomes null and void immediately if the teacher is found drinking beer, wine or whiskey.

Not to ride in a carriage or automobile with any man except her brother or father.

Not to dress in bright colors.

To wear at least two petticoats.

Not to wear dresses less than two inches above the ankles.

To keep the school room clean.

Sweep the classroom floor at least once daily.

Scrub the classroom floor at least once weekly with soap and hot water.

Start the fire at 7:00 a.m. so the room will be warm when the children arrive.

Clean the blackboard at least once daily.

Not to use face powder, mascara, or paint the lips.

In the year 1838, the first school was taught in Camanche, with Miss Ann Eliza Thomas being the first teacher. For a number of years, school was held in rooms hired for that purpose. The salaries of the teacher and expenses of the school were raised by subscription. 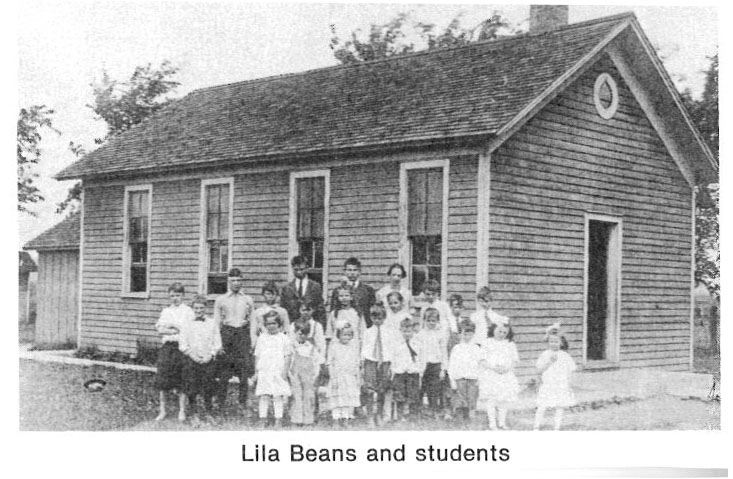 The first school, which was supported by public money, was held in a log cabin with Mr. Banker of Troy, N.Y., as teacher. In 1851, a brick building was erected which was also used for all public meetings until the tornado completely destroyed it.

A new frame structure was soon erected, which was afterwards enlarged so there would be four rooms. The school building was located in the main part of town, on Eagle Street, presently 3rd Street. After the completion of the new school, the old building was sold to Thomas Wolfe, who tore it down and used the materials for the construction of buildings on his farm. 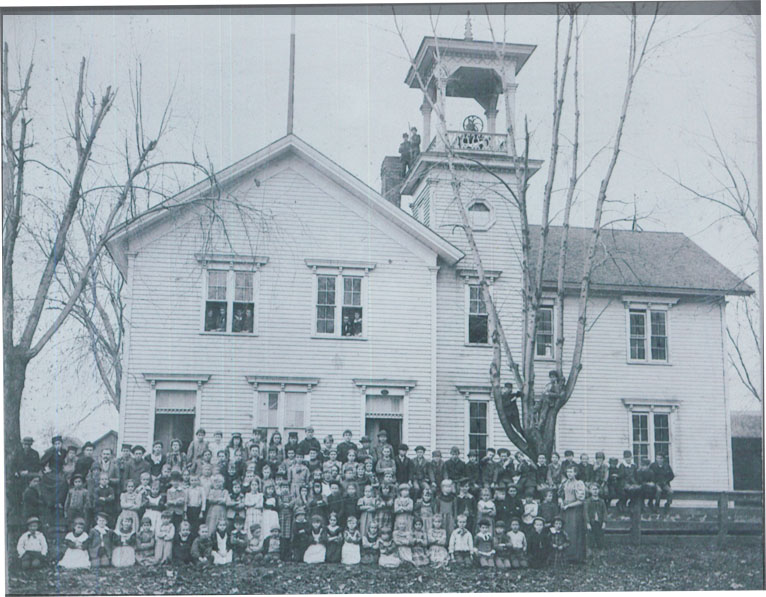 Judge A. P. Barker and Attorney George B. Phelps were former principals of the old school, also, Dr. George A. Smith of Clinton. Judge Barker was principal of the school in 1878-1879.

The Camanche School Board met October 27, 1927, and adopted the resolution to have a special election to vote on the proposition of issuing bonds to the amount of $23,000 for a new school building. On December 5, 1927, the election was favorable and the bond sale was set for February 21, 1928. The school property was bought from William Evers and is located between Chicago and Muscatine Streets, presently 9th Avenue and 13th Avenue. 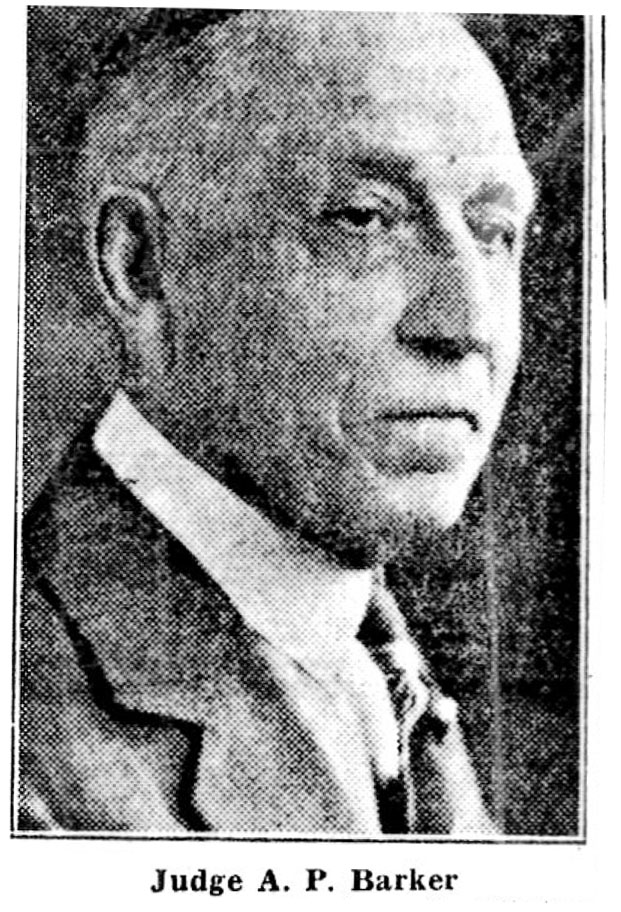 The building known now as Central Elementary School as completed for the beginning of school in September 1928. The building was made of brick and there were four grade rooms, assembly room, two classrooms for high school and the office on the main floor. On the ground floor there was a gymnasium, manual training room, home ec room, showers, toilets and heating plant. There were ten grades in the school.

The first board consisted of Willis McKenrick, President, H. P. Holmes, T. J. Ryner, F. A. Lehmann, and Joseph Chandler. Mrs. Gearge Farewell was secretary. Additions were added to this building in 1952 and 1954. Among the facilities in the additions were the multipurpose room, stage, kitchen and classrooms, all of which are still being used.

A very significant event in history of the Camanche Schools development happened on August 22, 1956 when the local Camanche School Board purchase 20+ acres of property located at what is presently west and north of the intersection of 9th Street and 9th Avenue. The purchase of this property from Agnes Clausen and Vic Sorenson was to be the site of a junior/senior high school building and cost $9,980. A bond issue was passed in 1958 and the new junior/senior high school was dedicated on May 22, 1960. School Board members and district personnel serving Camanche Schools at the time were: Vernon Truemper, President: William Cornish, Kenneth Pasick, Albert Paysen, Harlan Thomsen, Donald Green was Superintendent, Mrs. Arlene Scranton, Secretary and Lawrence Wiley, Treasurer. Other board members who served during the planning stages of the project included: Albert Blount, Herbert Horst, Alden Lorenzen, Russell Mensinger, Mrs. Marian Shaff, and Superintendent Fred Mona. This original building contained 39,646 sq. ft. and carried a rated student capacity of 300 students. 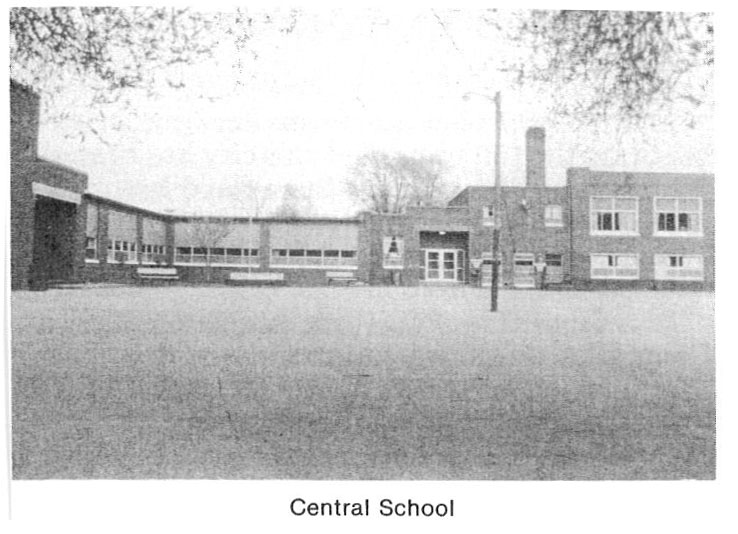 The secondary facility allowed the district to bring back high school students who were tuitioned to Clinton High School and subsequently in May 1961 Camanche turned out its first graduating class of seniors. An addition to this building was constructed in 1965 at a cost of $247,000. It provided approximately 23,000 sq. ft. of space and added classrooms, shops, a music room, locker rooms, and a stage in the gymnasium.

To further expand the facilities of the district a bond issue was passed in February 1961 to finance the construction of a new elementary school for the district. A construction price of $133,000 was paid for the original building of approximately 10,000 sq. ft. located at 5th Avenue between 11th and 13th Place. The site for the school included several lots purchased from James and Geraldine Bark, James and Peggy Clary, James and Grace Bacon, Orland and Madge Bacon, Mrs. Nimieoka Mace, Mrs. Ethel Hardcastle and LaVerne and Marien Wiese for a total of $15,866. This facility was to house grades up to 4th grade. Because of the continued enrollment growth of the district, additions costing $264,000 in 1965 and $153,830 in 1973 were subsequently added to the Northeast Elementary building. These projects added approximately 19,000 sq. ft. to the size of the building and made it a very attractive and complete facility. 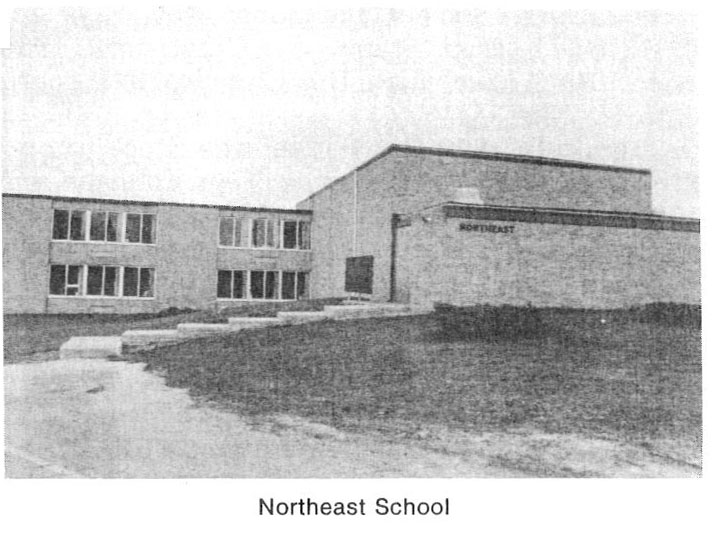 In January of 1970, the school district purchased approximately 18 acres from Louis Kraciun on a site adjacent to the high school on 9th Avenue for the use of a possible site for a future high school building project subsequent to the property acquisition. A $1,695,000 bond issue was passed on February 21, 1974 and a new senior high school was built and occupied in January 1976. 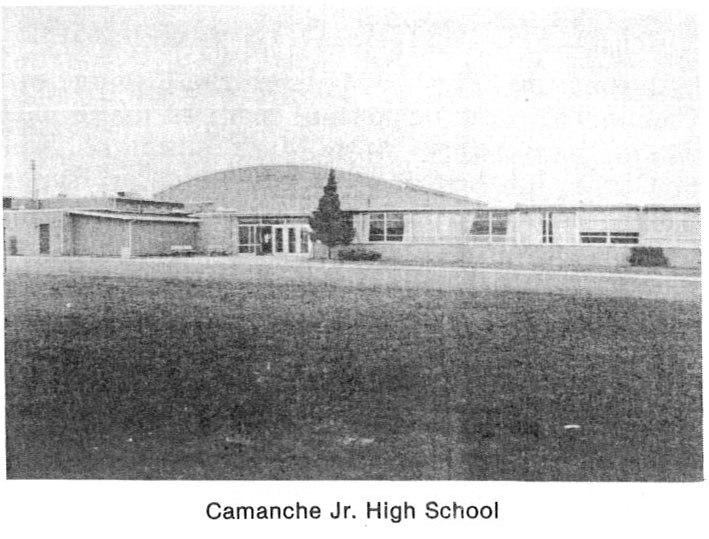 The building was located on a sight immediately to the north of the existing high school. The plan for the use of the district's facilities was to house grades K-3 at the Northeast Elementary, grades 4-6 at Central School, grades 7-9 at the old high school, and grades 10-12 at the new building. This transition was made on a January day 1976. Students, teachers, parents, and all school personnel were involved in moving that cold winter day. 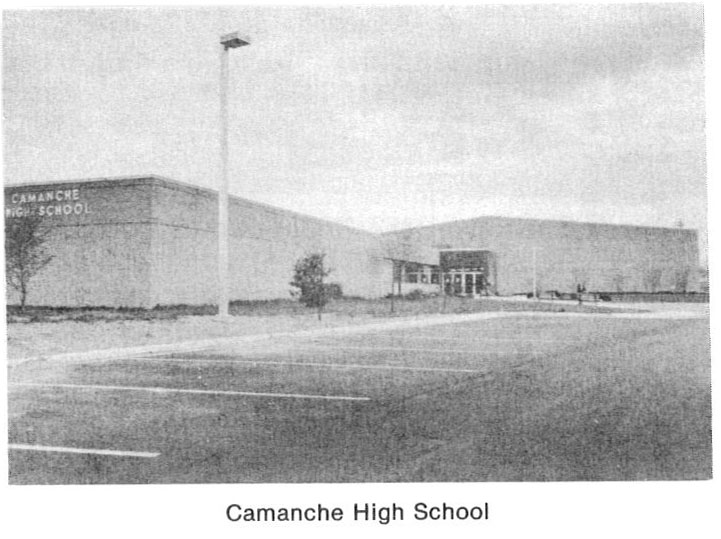 The most recent addition expanding the school facilities was the building of a swimming pool at a location between the junior and senior high schools occupied in 1980. This beautiful indoor-outdoor pool provides a swimming instruction facility for all students in the Camanche Schools during the year. It is also used as a recreational swimming pool for the community after school hours and in the summer.